KIDNEY STONE AND ITS HOMEOPATHIC TREATMENT 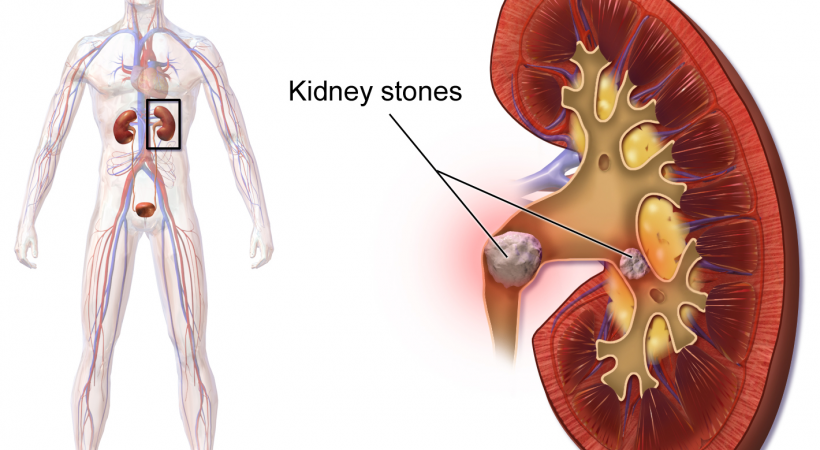 KIDNEY STONE AND ITS HOMEOPATHIC TREATMENT

Kidney stone or renal calculi are solid concretions or calculi (crystal aggregations) formed in the kidneys from dissolved urinary minerals.There are several types of kidney stone based on the type of crystals of which they consist. The majority are calcium oxalate stones, calcium phosphate stones, Staghorn calculus, rarely struvite stones and people with certain metabolic abnormalities may produce uric acid stones or cystine stones.

– Colicky pain: “loin to groin”. Often described as “the worst pain ever experienced”.

– Hematuria: blood in the urine, due to minor damage to inside wall of kidney, ureter and/or urethra.

– Pyuria: pus in the urine.

– Oliguria: reduced urinary volume caused by obstruction of the bladder or urethra by stone, or extremely rarely, simultaneous obstruction of both ureters by a stone.

– Frequency in micturition: Defined as an increase in number of voids per day (>than 5 times), but not polyuria, an increase of total urine output per day (2500 ml).

Preventive strategies include dietary modifications and sometimes also taking drugs with the goal of reducing excretory load on the kidneys:
Ø  Drinking enough water to make 2 to 2.5 liters of urine per day.Ø  A diet low in protein, nitrogen and sodium intake.Ø  Restriction of oxalate-rich foods, such as chocolate, nuts, soybeans, rhubarb and spinach, plus maintenance of an adequate intake of dietary calcium. There is equivocal evidence that calcium supplements increase the risk of stone formation, though calcium citrate appears to carry the lowest, if any, risk.Ø  Some fruit juices, such as orange, blackcurrant, and cranberry, may be useful for lowering the risk factors for specific types of stones. Orange juice may help prevent calcium oxalate stone formation, black currant may help prevent uric acid stones, and cranberry may help with UTI-caused stones.Ø  Avoidance of cola beverages.Ø  Avoiding large doses of vitamin C.Ø  Restricting oxalate consumptionØ  Decreased protein diet

Homeopathy is highly effective in alleviating renal colic and other signs and symptoms associted with renal calculi and thereby reducing the injury caused to the already injured renal parenchyma, due to allopathic painkillers and antibiotics.All types of renal calculi whether of uric acid, phophate or oxalates are very effectively removed by homeopathic medicines. Homeopathy is  not only useful in disintegration of Kidney stone but even helps to expel larger calculi by increasing the peristaltic motion of ureters.Homeopathy has far greater role to prevent the recurrence thus permanently cureing the tendency of   Kidney stone formation which recur again and again after surgery or lithotripsy.Only Homeopathic system of medicine can regulate the uric acid metabolism  Thereby both newly diagnosed cases as well as recurrent and chronic cases, where surgey, ESWL has already been done,  are equally benefitted. Some common Homeopathic medicines are Lycopodium, Berberis Vulg, Epigia, Terebinth, Ocimum, Sarsaparella, Cantharis, Urtica Urens, Pulsatilla, Apocyanum , Acid Phos ect. on the basis of the symptoms, but selection of constitutional drug is must to end up the tendency of stone formation

Previous
Kidney Failure and how Homeopathy can help
Next
Sexual dysfunction